Nothing More To Say, but So Much Left Unsaid

It hasn't sunken in yet.... everyone is still waiting for that 'ha-ha' moment that has yet to come. No one would care if it was all a joke, we'd all be happy just to have him back in our lives again. All the boys that are in scouts together are wearing their uniforms in memory of him. Every time I see one of them it's kind of a surprise... Boys that are in the more 'popular crowd' are wearing their colours proudly and when I remember what it is for it brings a tear to my eye. Another heart wrenching moment is when the librarian told me that one of the teachers are going to order a book in honour of the boy we lost. Now the librarian has to write a letter to his mother to let him know that this is what's being done for him. In a sense, it's bitter-sweet. Even tho it's only about 11:30, this day seems to be dragging on since I only had about 6 hours of sleep, which for me isn't all that much anymore. I was up on the phone till 11:55 talking to my two best friends, one who considered him a brother and had known each other since first grade, and the other was the girl I talked about the play with yesterday. 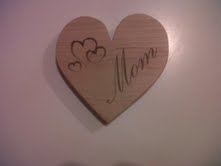 There are so many more things I could write here... the fact that there was nothing left of the front of the truck, and that the tree is still standing as tall as it did yesterday and the day before that without much more than a scratch. I could tell you all that I was told that in the glove compartment was a wooden heart that he was making for his mum for Christmas and had etched in with the laser three smaller hearts and the word "Mom" and had plans to put it on a darker piece of wood and to also include a poem. But to retrieve just that simple wooden heart with the few details, a family friend who's the father of the boy I stayed up all night talking to had to take a crowbar to make some sense out of where the glove compartment would be. Somehow, it made it out without any apparent damage. I could tell you that he had turned his life around, had finally gotten the call that he was accepted into the army, a dream he had been dreaming ever since he was little. He was a good kid... and we all miss him terribly.

As I typed my post yesterday and as I type this one, I'm trying not to use names. It's actually quite hard, but I'm trying to leave it as raw a post as it can be. No attachments in the sense that anyone reading this can place a name of their best friend, a boy and a girl, in. Then they can read and put a name in as someone young they've lost. And so on and so forth. I'm sure that there are many people that can relate to this and to those who don't know what it's like consider yourself blessed. Reading this can only give you a slight understanding of the pain there is.

Email ThisBlogThis!Share to TwitterShare to FacebookShare to Pinterest
Labels: Class of 2012, death, Diary of Me, Thoughts, Tom Lynch